(a) Copper can be extracted from molten copper chloride using electrolysis.

The apparatus is shown below: 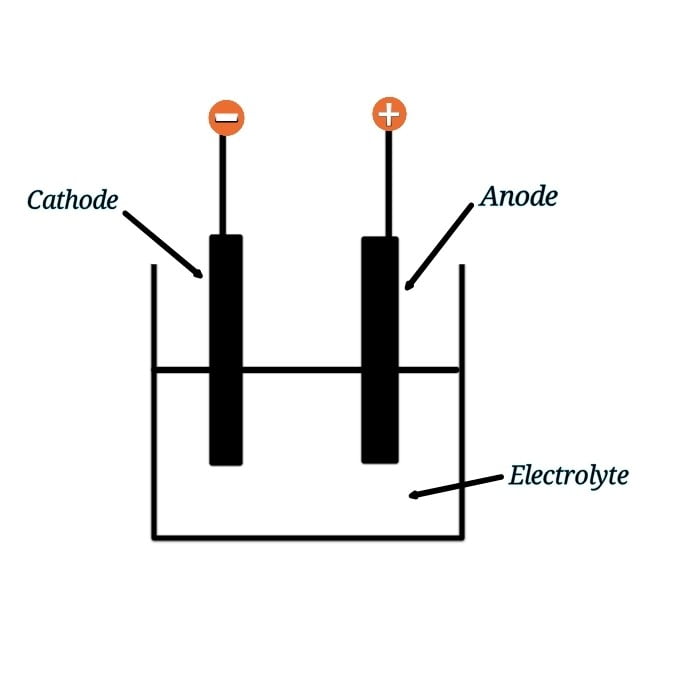 (i) State whether this process for the extraction of copper involves a chemical change or a physical change. Explain your answer. [1]

(ii) Identify the two ions present in the electrolyte and describe, in terms of electrons, the changes to these ions at the electrodes. [3]

(b) A student finds out that copper can also be extracted by heating copper(II) oxide with carbon.

(i) Name the type of chemical reaction in which copper oxide is changed to copper.
[1]

(ii) Construct the balanced chemical equation for this reaction.
[2]

a) i) chemical
change. Because new substances are made.

Reduction is the removal of oxygen from a substance. In this case, copper oxide loses oxygen to become copper.

(a) An atom of bromine is represented by the symbol

(i) State the number of electrons, neutrons and protons in this atom. [3]

(ii) Complete the table to show the relative charges and approximate relative masses of electrons, neutrons and protons.

(b) Bromine is a non-metallic element.
State the types of bond that form when bromine reacts with sodium and with hydrogen.
Explain your answers in terms of electrons.
[3]

(c) Use the periodic table to predict one Group VII element that is displaced from its salts by bromine.
[1]

(d) Argon is a noble gas. The noble gases are in Group VIII of the Periodic Table.

(i) State the electronic structure of an atom of argon. [1]

(e) Bromine is added to two different samples of hydrocarbons A and B.

Hydrocarbon A decolourises the bromine.

Hydrocarbon B has no effect on the bromine.

State these two types of hydrocarbon.
[2]

(f) The combustion of hydrocarbons produces a gas that turns limewater milky.

(ii) Suggest one concern that people have as the proportion of this gas is increasing in the air.
[1]

b) Bromine and sodium forms ionic or electrovalent bond whilst bromine with hydrogen forms covalent bond.

Explanation: Sodium atoms lose electrons to bromine atoms to form Na + ions and Br – ions which then attract each other to form an ionic or electrovalent bond.

Bromine and Hydrogen share electrons to form a covalent bond.

A halogen higher on the periodic table displaces any halogen below it from a solution of its ions.

Alkenes /unsaturated hydrocarbons react with bromine to produce colourless compounds. This also used as a test for alkenes or a test for unsaturation.

Carbon dioxide reacts with colourless limewater (calcium hydroxide) to produce a white precipitate of calcium carbonate. This is used as a test for carbon dioxide.

ii) It causes global warming, due to its greenhouse effect which leads to negative effects such as climate
change, polar ice melting and rising sea levels.

A student reacts dilute hydrochloric acid with a solid metal carbonate, as shown below:

(iii) Describe the change in the pH of the solution during the reaction.
[1]

(iv) The student records the time taken for the reaction to stop.
Suggest how she knows that the reaction has stopped.
[1]

(b) The student changes the concentration of the acid and then repeats the reaction.

(i) Describe the effect of using acid with a lower concentration on the rate of the reaction.
[1]

(ii) Suggest one other way of changing the rate of the reaction. [1]

(c) Describe a test to show that the acid used contains chloride ions.
State the change that is observed.
[2]

Acids and carbonates react to produce a salt and carbon dioxide gas.

The pH of dilute hydrochloric acid or any acid is lower than 7. When an acid reacts with a carbonate, metal or alkali, the acid is neutralised and it pH rises towards 7. 7 is the pH of a neutral substance.

(iv) The fizzing or production of bubbles of CO2 stops.

Filtration is a method used to remove a solid from a liquid because a solid cannot pass through a filter paper.

(b)(i) Rate of reaction is reduced.

Lowering the concentration of reactants reduces the number of reacting particles and chances collisions leading to succefully is lowered.

(a) Natural gas and petroleum (crude oil) are fossil fuels.

(iii) Name the gas in air that reacts with fuels when they burn.[1]

(b) Petroleum is a mixture of hydrocarbons.

(i) Name the process used to separate petroleum into useful products.
[1]

(ii) State the meaning of the term hydrocarbon.
[2]

(c) Ethanol, C2H5OH, and hydrocarbons burn to form carbon dioxide and one other product
during complete combustion.

(ii) Draw a diagram to show the structure of a molecule of ethanol.

(ii) A compound containing carbon and hydrogen only.