Facebook should sell WhatsApp and Instagram, says US Federal Trade Commission as it reopens its complaint against Facebook. The FTC argues that the Facebook should be broken up from Instagram and WhatsApp to avoid monopoly over social networking in the US and make it easier for other companies to compete.

This comes amid mounting scrutiny over the way that Facebook has bought up competitors as they have grown and and has undertones of the email from Mark Zuckerberg, in 2008, in which he said “it is better to buy than compete”. The FTC’s lawyers also used this as a refrence that Facebook has been using that strategy ever since. The purchased competitors includes Instagram and WhatsApp, both make up a large part of the Facebook empire.

Critics have since pointed out that Mark Zuckerberg has been active in trying to integrate WhatsApp, Facebook and Instagram under the guise of improving ease of use, yet it being a way to make it harder for regulators to break up the three apps.

The lawsuit notes that the closest competitor is Snapchat which has far fewer users than either of the two Facebook social networking apps. It also notes that Facebook will continue to buy or “kneecap” companies if it is not stopped.

Beside askinh Facebook to sell it businesses, the suit also asks that Facebook is restricted from making similar purchases in the future, including by rules that would force the company to seek approval if it wants to make similar deals. 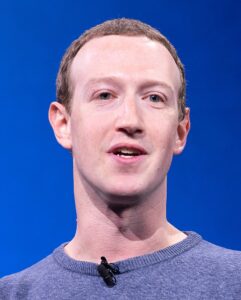 Mark Elliot Zuckerberg (born May 14, 1984) is an American media magnate, internet entrepreneur, and philanthropist. He is known for co-founding Facebook, Inc. and serves as its chairman, chief executive officer, and controlling shareholder. He is also a co-founder of the solar sail spacecraft development project Breakthrough Starshot and serves as one of its board members.