Elon Musk working on a humanoid robot that will "automate the boring stuff". Well, of course, we kind of expected it a long time ago from the guy once nicknamed "The real life Tony Stark". He seems to be living up to that as he just added a robot to his list of things always coming ‘next year.’

Elon Musk announced on Thursday night at Tesla’s AI Day that the company is building a humanoid robot, with its prototype to be unveiled next year. 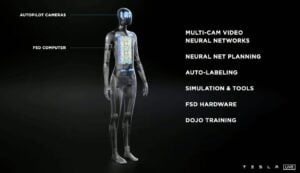 A look at the Tesla’s forthcoming humanoid robot (Source: Tesla)

"It’s basically going to start dealing with work that is boring, repetitive and dangerous," Musk said of the Tesla (TSLA) robot. "What is the work that people would least like to do?"

The robot will have a screen visor that will act as a human face to display "useful information," according to Musk.

Hopefully, according to him the robot would have a "profound" impact on the economy and make physical work for humans obsolete in the future. This seems ironic, considering that Musk is among the Silicon Valley leaders who have always cautioned that technology may eliminate the jobs of many people and that some humans will have to find other sources of income.

"But not right now because this robot doesn’t work," Musk added.

Though humananoid robots have long been a fascination in pop culture, creating a humanoid robot that actually performs human tasks has proven incredibly difficult. Even the rapid advancement in artificial intelligence in recent years has done nothing to produce anything with the learning abilities of even a human toddler. As a result, robotics applications have been restricted to basic repetitive tasks in simple environments, such as in factory assembly lines. We still wait with fingers crossed to see how soon this genius with a reputation for missing deadlines will render our jobs obsolete.

He described the robot as an extension of Tesla’s work to build self-driving vehicles and said the robot will use the same computer chip, and navigate with eight cameras, just like Tesla’s vehicles.

The robot will stand at 1.7 m high, weigh around 57kg and have the capacity to carry up to 20kg at a speed of up to 8km/hr. Musk said robot will have five fingers on each hand and also joked that the robot would be friendly. Well, we also hope it will be a friendly neighbourhood robot and not turn into an ultron. As the man himself said, "Well I guess you’ll just have to see".

"Can you talk to it and say, ‘please pick up that bolt and attach it to a car with that wrench,’ and it should be able to do that," Musk said. "’Please go to the store and get me the following groceries.’ That kind of thing. I think we can do that."

"We hope this does not feature in a dsytopian sci-fi movie," Musk said. 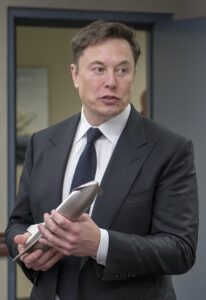 Elon Reeve Musk (born June 28, 1971) is an entrepreneur and business magnate. He is the founder, CEO, and Chief Engineer at SpaceX; early stage investor, CEO, and Product Architect of Tesla, Inc.; founder of The Boring Company; and co-founder of Neuralink and OpenAI. A centibillionaire, Musk is one of the richest people in the world.