On Monday, a warrant of arrest for MDC Alliance vice president Tendai Biti was dramatically cancelled a few hours after it was issued.

The National Prosecuting Authority said that Biti had failed to appear in court for his trial in which he is accused of assaulting a Russian woman in November last year. In a dramatic twist of events, a warrant of arrest of Biti was then issued for his no show when yet he was actually there at the court. Biti called it a "prepaid warrant" since the state run media outlet, The Herald, reported about the warrant before it was issued.

Biti, a lawyer by profession, said, "Despite the fact that I was at court by 8.30AM, state prosecutor Michael Reza applied for a warrant of arrest against me in my ongoing persecution engineered by land baron Ken Sharpe. This was a prepaid warrant as The Herald was reporting on the same before its issuance.

"In cancelling the warrant, magistrate Stanford Mambanje was critical of the state position and state lies. It is quite clear, the extent of state capture, and the desperate attempt to silence critical alternative voices. We have never been cowards. We never yielded on matters of principle."

Biti said, "neither (President Emmerson) Mnangwagwa nor his political commissars masquerading as prosecutors will stop wheels of change."

The warrant was signed by magistrate Chido Garwe at Reza’s request on Monday morning.

Biti told ZimLive that he was due to appear before magistrate Vongai Guriro in Court 14, which is where he was when another court was deciding his fate.

He said, "A prosecutor Malvern Mapako, in charge of Court 14, told me to wait in his court for that’s where Guriro’s matters were being handled in her absence by magistrate (Chipo) Mabhande.

"Prosecutor Reza then sneaked on the record and got a warrant at 9.03AM. To my surprise The Herald had a full story by 9AM. Court theoretically starts at 9AM but you are likely to start at 9.30AM on any given day. For some reason, I decided to go to court early, I was there by 8.30AM."

The charge against Biti dates back to an alleged incident following a court hearing on November 30.

Biti was representing building contractor George Katsimberis, a client in the Harare Airport Road scandal case in which Katsimberis is alleged to have defrauded a land developer with whom he had entered into a joint venture to build cluster houses in Harare’s Borrowdale suburb.

Aleshina is one of the witnesses in the case and the chief operating officer of the land developer who was allegedly defrauded.

During the court proceedings, Aleshina was reportedly whispering information to the prosecution constantly.

Biti raised a complaint to the magistrate about Aleshina’s conduct, which led to Aleshina confronting Biti after the court shouting shouting at him.

It is the State’s case that Tatiana Aleshina was then insulted and assaulted by Biti outside the courtroom. She filed a report with the police and has also lodged two further complaints with the Law Society of Zimbabwe.

Aleshina says Biti should be investigated for alleged gross unprofessional conduct she alleges she and her workmates were intimidated and verbally abused outside the court each time they came for proceedings.

She claims that on November 30 last year as she was about to leave the court gallery after a court session Biti allegedly threatened to harm her. 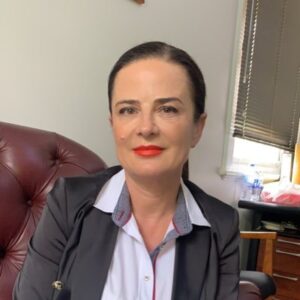 "It was clear to all people who were in the court gallery that Mr Biti took delight not only in verbally abusing me, but in trying to intimidate me and felt that, as a woman and foreigner of Russian origin, he would use every extra judicial means to crush me or harm or destroy me for daring to be a witness in the criminal matter against his client," she stated in her complaint.

According to prosecutors, Biti threatened Aleshina by pointing a finger at her face, shouting insults at the top of his voice "intending to inspire fear of belief into her mind".

The prosecution also says Aleshina was later hospitalised at Borrowdale trauma centre as a result of shock from her encounter with Biti.

Biti denied the charge and his party described it as “trumped up” and a “weaponisation of the law” to target party members and officials.

Chinese National Under Investigation For Marrying Underage Zimbabwean Girl The Zimbabwe Republic Police (ZRP) is investigating a case where a family married off their 15-year-old daughter to a Chinese national, forcing the girl to drop Read more…

Scammers Flood Social Media, Pretend To Sell Goods To Rob Potential Buyers Scammers have now moved to social media platforms to offer deals on vehicles but request the buyers to pay up with cash in Read more…