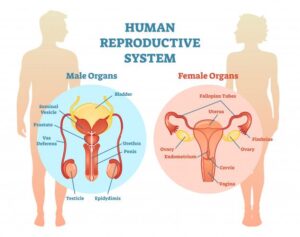 Sperm are produced in the male reproductive organs the testes (singular = testis). The testes lie outside the abdominal cavity in a special sac called the scrotum. The sperm are then stored in the epididymis until they are mature. The epididymis then leads into a muscular sperm duct (vas deferens). The two sperm ducts, one from each testis, lead into the top of the urethra. The urethra passes through the penis and may conduct either urine or sperm at different times.

Function of the epididymis

Function of the sperm duct

Function of the urethra

Function of the penis

The testes produce sperm and the sperm are stored in the epididymis until they are mature. During copulation, the epididymis and sperm ducts contract to force sperm out through the urethra.

The prostate gland and seminal vesicle then add fluid to the sperm. This fluid plus the sperm it contains is called semen, and the ejection of sperm through the penis is called ejaculation. 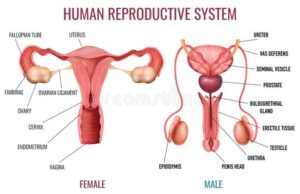 The eggs (ova) are produced from the female reproductive organs called ovaries. The ovaries are in the lower half of the abdomen, one on each side of the uterus. Close to each ovary is the funnel-shaped opening of the oviduct (fallopian tube), the path through which the ova pass when released from the ovary. The oviducts lead into the uterus or womb. The uterus then leads to the outside through a narrow muscular passage called the vagina. Between the uterus and the vagina is the cervix which is a ring of muscle closing the lower end of the uterus.

Function of the ovaries

Function of the oviduct

Function of the cervix

Function of the vagina

The egg cells (ova) are present in the ovary from the time a female is born. During puberty the egg cells start to mature and are released, one at a time about every 28 days from alternate ovaries. The ovum is released into the funnel of the oviduct. This process is called ovulation. The ovum is wafted down the oviduct by the action of cilia in the lining of the oviduct. If the ovum meets sperm cells in the oviduct, it may be fertilised by one of them.

After being deposited in the vagina, the sperm swim through the cervix and into the uterus by wriggling their tails. They pass through the uterus into the oviduct. Although a single ejaculation may contain over three hundred million sperm, only a few hundred will reach the oviduct and only one will fertilise the ovum.

If there is an ovum in the oviduct, one of the sperm may bump into it and enter the cytoplasm of the ovum. The male nucleus of the sperm then fuse with the female nucleus. This is fertilisation.

The product of fertilisation of an ovum by a sperm is called a zygote. A zygote will then grow by cell division to produce first an embryo and then a fully formed baby. 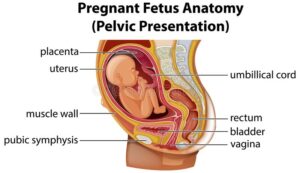 The zygote first divides into two cells. Each of these two cells divides again, so producing four cells and so on until it becomes an embryo. The embryo then travels down the oviduct to the uterus where it implants into the lining of the uterus. This process called implantation.

As the embryo grows, the uterus enlarges to contain it. Inside the uterus the embryo becomes enclosed in a fluid-filled sac called the amnion or water sac. The fluid is called amniotic fluid. This protects the embryo from damage.

The oxygen and food needed to keep the embryo alive and growing are obtained from the mother’s blood through the placenta. After 8 weeks, when all the organs are formed, the embryo is called a fetus.

After a few weeks of development, the embryo’s heart is developed enough to circulate blood through the umbilical cord and placenta as well as through its own tissues.

Functions of the placenta