A leaf is attached to the stem by a leaf stalk, which continues into the leaf as a midrib supporting the whole leaf structure. A network of veins branches from the midrib delivering water and salts to the leaf cells and also carrying away the food made by the leaves. 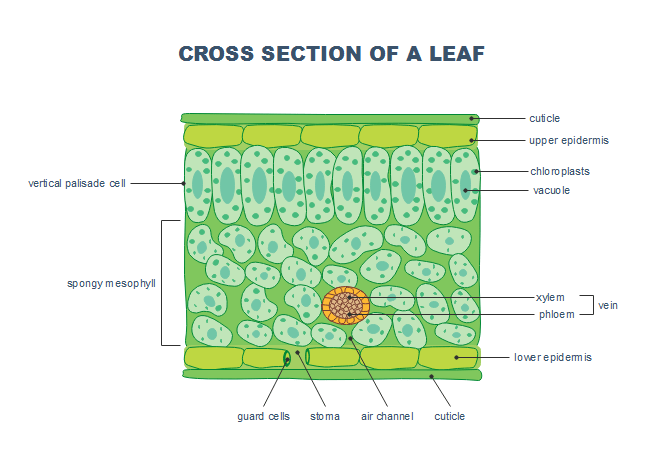 The epidermis is a cell layer on the upper and lower surfaces of the leaf. It is covered by a thin waxy layer called the cuticle.

Functions of the epidermis:

In the leaf epidermis there are very small openings called stomata (plural). A stoma (singular) is surrounded by a pair of guard. In some plants, the stomata occur only in the lower epidermis whilst in some the stomata are equally distributed on both sides of the leaf.

The palisade mesophyll layer consists of palisade cells which are usually long and contain many chloroplasts. Chloroplasts are green organelles which contain the chlorophyll for photosynthesis. They are found in the cytoplasm of the palisade cells.

The spongy mesophyll cells vary in shape and have air spaces between them to allow carbon dioxide to diffuse into the leaf and oxygen out of the leaf.

Vascular bundles (veins) are made up of two different types of vessels, called xylem and phloem.

The xylem vessels are thick walled long thin tubes empty of cell contents when mature. Their role is to carry water and dissolved salts to cells of the leaf.
.
The phloem vessels are like sieve tubes, the ends of which are perforated like sieve plates. They transport food made in the leaf, such as sugars to other parts of the plant.

Adaptation of leaves for photosynthesis

When something is said to be adapted, it means that its structure is suited for its function. The leaf has the following adaptations for the process of photosynthesis:

Summary of the parts of a leaf