Digestion is the breakdown of complex insoluble food particles into smaller soluble molecules that can be easily absorbed by the body. Digestion occurs in the alimentary canal.

Mechanical digestion occurs in the mouth. This is basically a process by which food is crushed by the teeth into smaller particles. The process called is called mastication or chewing.

Chemical digestion is facilitated by the presence of chemical called enzymes.

The alimentary canal has many organs, each specialised for its own role in digestion. 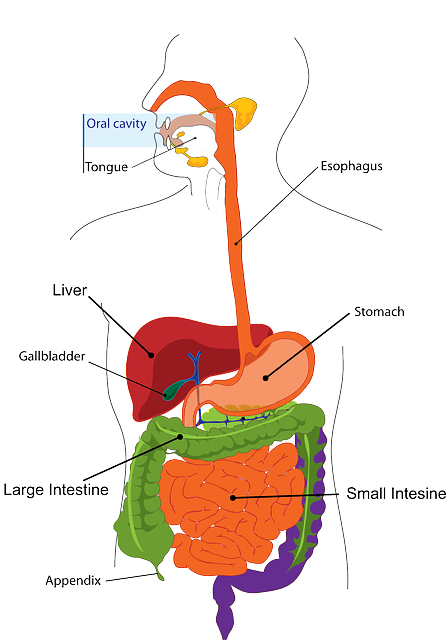 The food is ingested through through the mouth where it is chewed and mixed with saliva. The chewing breaks the food into pieces small enough to be swallowed. Chewing also increases the effective surface area of the food for the enzymes to work on.

Saliva helps to lubricate the food and make the small food pieces stick together. It contains any enzyme called salivary amylase, which acts on cooked starch and breaks it down into maltose.

From the mouth the food is swallowed into the gullet. In the gullet, the food is pushed along the gullet by a process called peristalsis. The alimentary canal has muscle layers that run around it (circular muscle) and the others that run along its length (longitudinal muscle).

The circular muscles contract in one region, narrowing the alimentary canal in that region. This pushes the food forward. This contraction is followed by another contraction just below it creating a wave of contractions along the canal, pushing food in front of the wave until it reaches the stomach. This process is called peristalsis.

The stomach is a small elastic container which stretches as the food collects in it. There is a circular sphincter muscle at the bottom end of the stomach that stops the food from passing through.

The stomach has glands in its lining to produce gastric juice containing the enzymes such as pepsin for the digestion of protein. The stomach lining also produces hydrochloric acid, which provides the best pH for stomach enzymes to work efficiently. The hydrochloric acid also kills many of the bacteria in the food.

After some time, the sphincter lets through the liquid products of
digestion, a little at a time, into the upper part of the small intestine called the duodenum.

In the duodenum, the food is mixed with a digestive juice from the pancreas (pancreatic juice) and bile from the liver.

The pancreas is a digestive gland that produces a number of enzymes, which act on all food groups, eg:

The absorption of the end products of digestion is not just a matter of simple diffusion. Amino acids, sugars and salts are taken up by active transport.

Bile is a green liquid made in the liver. It is stored in the gall-bladder and poured into the duodenum via the bile duct. It contains bile salts which emulsify the fats before their digestion. This breaks them into small droplets with a large surface area for lipase to efficiently digest the fats.

Bile is slightly alkaline so it neutralises the acidic mixture of food and gastric juices as it enters the duodenum from the stomach.

The large intestine is made up of the colon and the rectum. The material that passes into the large intestine consists
of water and undigested matter. Absorption of water and salts takes place in the colon. The waste, called the faeces or "stool", is then passed into the rectum by peristalsis. From the rectum, the waste is expelled through the anus. The passing out of the faeces is called egestion or defecation.

Use of digested food

The products of digestion are transported around the body dissolved in the blood. The cells then absorb and use glucose, fats and amino acids. This use of food is called assimilation.

Glucose is used for respiration in the cells to produce energy. During respiration, glucose is oxidised to carbon dioxide and water. This produces energy to drive the many cellular processes in which result in, for example, the contraction of muscles or electrical changes in nerves.

These are assimilated into cell membranes and other cell structures. Fats can also also be used as a source of energy for cell metabolism because they can provide twice as much energy
as sugars.

These are absorbed by the cells and built into proteins, some of which will become plasma proteins in the blood. Others may become structures such as cell membranes.