Carbon cycle in the ecosystem

Carbon cycle in the ecosystem

The carbon cycle is a cycle by which carbon is exchanged between the ecosystem and atmosphere of the Earth.

Carbon is the main component of all living organisms and the carbon cycle comprises a sequence of events that make the Earth capable of sustaining life. 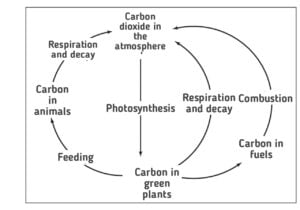 Greenhouse effect and the carbon cycle

Over the past two centuries, human activities have increased the amount of carbon in the atmosphere by about 50% as of year 2020, mainly in the form of carbon dioxide by:

Atmospheric carbon dioxide is one of the gases that keep the earth warm by trapping the sun’s radiant energy in the atmosphere instead of allowing it to radiate back into space. This is called the greenhouse effect.

An increase in carbon dioxide level in the atmosphere results in an increase in overall temperatures on earth. This slight increase in temperature, with time, causes major changes in world temperatures, resulting in melting of ice caps and flooding of coastal areas.