Rusty Labuschagne, is a successful businessman, who ran a safari outfit before being accused of drowning a poacher near his fish resort in Zimbabwe in late December 2000.

He survived 10 years of the horrendous Zimbabwean prison cells and lived to tell his tale which goes as so:

“I went on a fishing trip with friends to my fishing resort on Lake Kariba in December 2000. Late one afternoon, one of my mates (Spike Claasen) and I decided to go tiger fishing on the lake, leaving the other guys bream fishing in a river section.

“On our way back, we spotted two fish poachers in a steel boat, who immediately, upon seeing us, started paddling hastily for the shore in an effort to get away from us. Knowing that they were notorious poachers, I drove my boat towards them to scare them off, and the wake of my boat tilted theirs, causing them to jump out into the water, which was about 1.5m deep.

“They were about three metres from the shore and soon scrambled to dry land. Spike and I then watched as they ran away into the bush, and thought nothing more of it.

“The following day the police arrived and accused us of drowning one of those poachers. I was framed by the poacher, the police, and the courts, in an ugly politically influenced conspiracy and sentenced to 15 years in prison, of which five were removed as remission.

“Unbelievably, Spike only got a $10 fine and was set free because he was not driving the boat.”

Sadly, Rusty was sentenced to 15 years in a Zimbabwe prison, with 5 being suspended. During his long incarceration, he served at various prisons in Zimbabwe such as Khami Maximum Prison, Chikurubi Maximum Prison, Harare Central, and also Connemara Open Prison.

Though he spent hundreds of thousands of rand trying to prove his innocence and fighting the system, no freedom came.

“In the judgment, the judge quoted as follows: ’It cannot be said that his aim and object was to kill the deceased.’ I felt some relief, then he went on to say: ’He, in my view, is clearly guilty of murder with constructive intent.’ I knew there had been political interference at the highest level but still hung onto the belief that surely someone would come to their senses and have me released.”

How does it feel

Though Rusty says he felt helpless when he realised he was going to spend a decade behind bars, he holds no grudges against anyone for his ordeal.

“I dont have any anger in my heart. People often ask me if I’d known what was to come before my conviction, and had a chance to run, would I have? My answer is no.

“I did have a chance but I refused. I never believed they would convict me for something I didn’t do. And I would have been labelled guilty, been on the run for the rest of my life, and would never return to my family, friends, and everything I’d worked my whole life for.

“I’d built an honourable reputation and have always been as strong as my word. That would have destroyed me inside and I’m happy to say, my reputation still stands strong.”

Rusty says his positive mentality through the daily pain of it all helped him get through each day.

“My first thought after being convicted was why me? Then I thought, does everyone else feel the pain I’m feeling? Am I different? Is this a dream? Then I thought maybe I’ve been put here for a reason. I’d always told my children that everything happens for a reason, now I had to walk my talk and accept that. It was the only thing that brought peace of mind.

“When I went to prison I was flying high, full of confidence, plenty of money, thinking I was bulletproof. When you go in there they break you, your confidence, your spirit, your soul, everything.

“I was blessed with a very positive attitude and I think it’s from hardships on my journey. I believe we are born with fortitude but we can learn resilience. There were big strong guys totally broken in prison, and ordinary looking guys that had learned to take the knocks and bounce back. Resilience is not a physical attribute, it’s a mental one.

“We would laugh and joke and fool around and play practical jokes on one another because it made us feel good.

“I was obsessed with fitness and keeping healthy and would train daily with bodyweight exercises and water containers. We’d play soccer or volleyball at every opportunity but being locked in cells for 20 hours a day left little time.

“Most of my time was spent either reading or daydreaming. I had this gorgeous fantasy girlfriend named Sherree and we’d fly all over the world in our private jet, catch marlin in Mexico and help those in need financially no end and I created this beautiful world I could go into, to get away and feel happy again.”

Inspiration through the dark

Labuschagne now resides in Cape Town with his wife Sandra. Among other things, he does motivational talks for corporates, private functions, and churches, and is also an author.

He has written a book about his experience. The book is entitled, Beating Chains, and is an inspiring story of hope and resilience through tribulations. In the book, he documents his time in prison in Zimbabwe. The book also describes his family history and his life in Zimbabwe as a successful businessman.

“After eight years in prison, I was transferred to a farm prison where I managed to acquire a smuggled iPhone. It occurred to me that my ordeal would inspire people and change many lives especially during the economic meltdown of Zimbabwe. I began documenting my experiences and emailing them to myself for safekeeping.

“There were hundreds of emails. After five years I was ready to confront the process, which was part of my healing.

“Most of the book refers to the horrendous conditions I was exposed to, the everyday trauma one endures and the diverse characters I encountered throughout that nightmare.”

“When you walk into prison, you walk in naked and you are owned by the state. They control what you wear, eat, drink, say, hear, read and write. There are no radios or TVs in prison, no incentives to behave. Prisoners are loud, boisterous, and unruly.

“The beatings are unimaginable, with thick rubber batons under the feet – if you don’t lie still and take your beatings, they beat you all over.

“There was no furniture in any prison for the first 8 years – no beds, tables, chairs, cupboards or mirrors. In my first cell, 13m long x 3m wide we were 78 inmates with 33cm each marked out on the walls in chalk – that was your space.”

“The toilet was a stainless-steel bowl sunk into an open one-meter square cement block in one corner. We were packed like sardines with legs all crossing over in the middle.

“As cushioning against the cold concrete floor, you’d fold two of your paper-thin, warn out lice-ridden blankets several times to fit your space, then covered yourself with the third one. Your clothes were wrapped around your toothbrush and toothpaste, or they’d get stolen, and that was your pillow.”

He survived the cholera epidemic of 2008 while in prison

Labuschagne was in prison during the cholera outbreak of 2008 in Zimbabwe, and the experience still haunts him to this day.

“After moving to Harare Central Medium-security Prison during the cholera outbreak in 2008 and 2009. In the first eight months there, out of 1200 of us prisoners, 432 died.

“That’s more than a third. It got so bad, we became totally desensitized. One afternoon my closest friend there and I were playing cards on the tarred floor of the crowded exercise yard and the guy sitting next to me rolled over dead. Nobody around us moved, we couldn’t believe it.

“We were all so used to seeing inmates dying, but it hit me hard. We just turned a little so we couldn’t see him, and carried on playing until prison hospital staff collected him.”

Labuschagne says, “No matter how strong a character you are when you go in there, you are crushed inside. 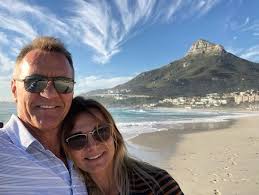 “It’s taken eight years to physically recover and I’d say my PTSD disappeared after about five years. I had no treatment as I didn’t believe any psychiatrist had ever experienced what I went through so how could they help. I’m anti-medication.

“I had scars I never believed would ever heal and an emptiness that I didn’t think would ever go away. But after three years I met Sandra, now my wife. Her deep love, unwavering support, and faith in God have made me whole again.”

Labuschagne now lives a life of inspiring as many people as he can. 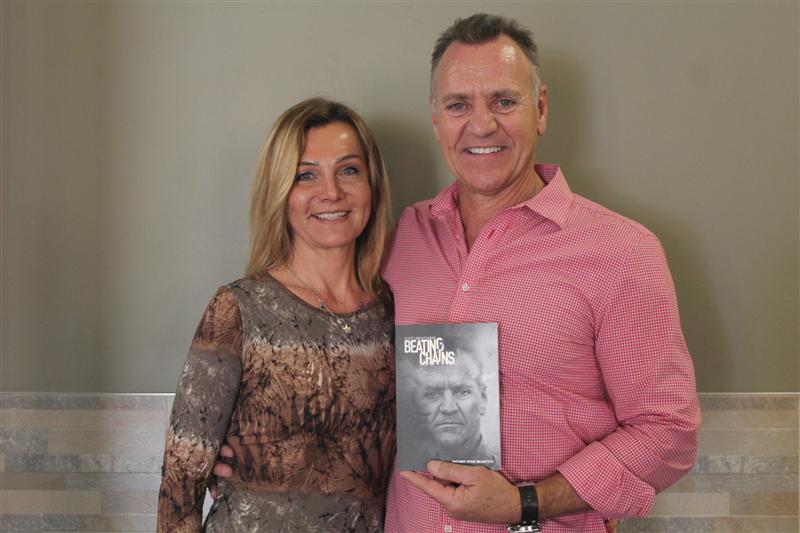 Rusty and his wife Sandra Greaves, with Rusty’s book.

“I feel that after overcoming those hardships, I’m now prepared for where I’m going.

“May this be a lesson to all: No matter what hardships you are going through in life, just remember that you are being prepared for where you are going. God has a plan for you.”