Behold The Slay Teacher Everyone’s Been Talking About. Her name is Lulu Menziwa and not many are happy with her outfit. Lulu is popularly known for her being stylish and comfortable with who she is. Some praised her, but many opposed her saying what she wears to the classroom is inappropriate for an educator. 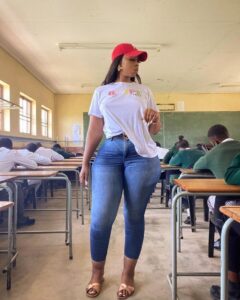 Lulu Menziwa is a teacher by profession and she became social media sensation after posting her pictures while in the classroom. Some people loved how bold she was when it came her outfits, while others thought it was not fit for school. Some were bothered by whether its their kids or not who were taking those pictures. I believe it was a fellow teacher. While others are busy debating on what a decent outfit for a female teacher should be, others defend her, claiming that haters don’t have a problem with her clothes, but with her body, and that accusing her of “being too attractive” is a form of discrimination. 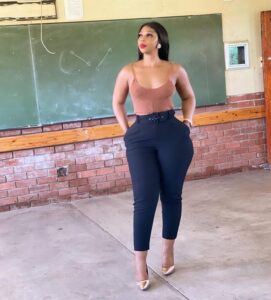 Recently we all got to see how she looks like in "decent" clothes and we liked her more. People were blown away by how she looks good in anything. She was wearing a beautiful african print style dress which made her look mature and classy at the same time. Menziwa isn’t just a teacher, she’s also a businesswoman and model, something she loves to share more about on her social media. Though she is able to show the world that she’s very proud of her body and isn’t ashamed to show it, both her job as a teacher and her hobby as a model are able to coexist. Although there will always be different opinions, there’s one thing that is absolutely certain: she enjoys what she does. 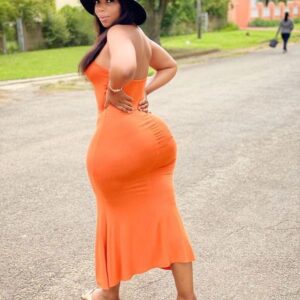