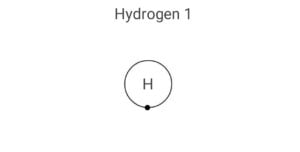 Ignite the gas with a burning splint and it burns with loud pop.

The position of hydrogen on the Periodic Table

On other Periodic Tables it is shown at the top of either Group I or Group VII.

The table below shows the comparisons of the properties of hydrogen, a Group I element and a Group VII element.

Hydrogen gas as a reducing agent for metal oxides

Hydrogen is a reducing agent and it removes oxygen from oxides of less reactive on the electrochemical series. Oxides of iron, lead and copper can be reduced by hydrogen as shown by the equations below.

Hydrogen itself is oxidised to water when it reduces a metal oxide to a metal.